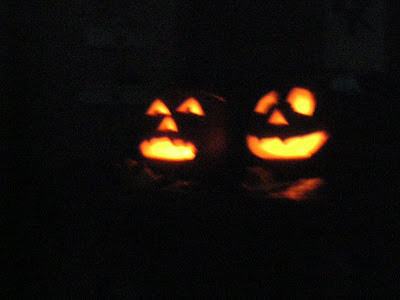 I forgot to show our two jack o lanterns from this year. The kids had a good time making them, although Sheridan was very fussy about the "pumpkin goo." Now they have departed for that great landfill in the . . . well, in the ground, Iguess.
The Cowboys won last night, and now have sole possession of first place in their division. It's only half way through the season though, so lets see if they can hold on to it.
My hands are still giving me trouble, so I've decided to bite the bullet and swear off the Diet Dr. Peppers for a while. We'll see if that improves things. Now it's stevia and tea.
I'm up late because I forgot to get the kids anything for their lunches during the day so I had to go out to Walmart tonight and get their stuff. Now to put things up and go to bed.
Hopefully I can get some writing done tomorrow. I intend to try. But we know where that road paved with good intentions leads . . .
Posted by D. Nathan Hilliard at 1:29 AM