The Joys of Editing Recently, while working on editing the manuscript to my latest project, I remembered a problem the last editor I worked with had pointed out. It seemed I had a tendency to over use the word "that". So keeping that in mind, I decided it might be a good idea to see if it still held true. So using the "find" function in word 2007, I had it do a "highlight all" of the word "that".

Then I watched my document light up like a Christmas tree.

Therefore, lately my job has been herding kids and squashing "that"s. As of now, over seven hundred of the pesky four letter words have been sent to that giant word bin in the sky. Maybe somebody else can use them. But at least the first pass of THAT project is done. Trust me, going through a ninety-five thousand word manuscript just ferreting out and squashing one word is a chore. I still expect to squash a couple of hundred more in the next pass. Then I guess I'll do a pass paying closer attention to the passive voice.

So yeah, editors are those people you never miss until you miss them. But I guess I would have still had to squash the word myself anyways.

Oh well, that is enough of that.
Posted by D. Nathan Hilliard at 8:36 PM 2 comments: 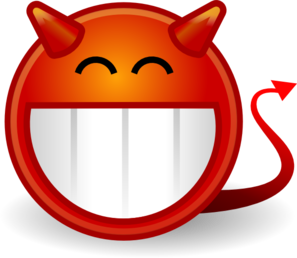 Technology is a funny thing.

Technology has allowed writers to do more and reach more people directly than at any other time in the course of history. Nowadays, any writer who spends a little time educating him/herself can write, edit, format, and publish his own book and put it up for sale in an online market viewed by millions of people a day. That’s pretty impressive when you think about it. Especially when you realize this was almost impossible as little as ten years ago.

But that technology which has so empowered us also comes with a dark side.  A malevolent force so black and insidious that we often don’t even realize its dangers until we have fallen deep within its steely clutches.

It lulls you in with it’s siren call of sociability. It even lures authors into it’s deathly embrace with the promise of marketing and exposure. But that’s not what it really does. Oh no, the reality is far different. What it really does is something so pernicious that many writers do not see it happening until they are already in trouble…for it does just about the worst thing you can do it to a writer.

It sucks us in, and before we know it we are a week behind on our editing, and that last chapter is still only half written. It even gets in our head so that when we are trying to focus on a particular scene, half of our brain is wondering what we are missing that one of our friends in  another state might be doing. And what if somebody wants to chat? Oh no! We dare not fail to keep checking in just so we don’t miss such an opportunity!

Argh! That last is the worst part, because a writer truly needs to be focused.

So I’m going to work on taming this evil beast. I shall forbid myself from going near it before noon for a beginning. We’ll see how that works. It’s not like anybody really has much to say before then anyways. I think I might also put it off limits after eight thirty as well. That’s when the kids go to bed…prime time for writing. 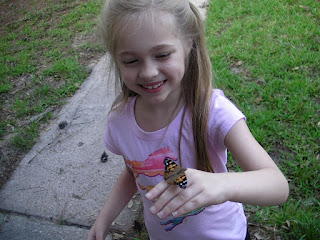 When the day comes that I can truly capture a moment like this with words... THEN I will be a writer.
Posted by D. Nathan Hilliard at 8:10 PM No comments: 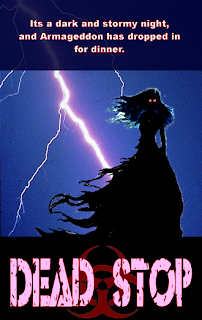 I'm working my way towards turning the rough draft into a first draft. Then I guess I'll have an entire manuscript for the proofreaders to dig in to. At the same time I'm still messing around with cover art possibilities.

In this second candidate, I have the same picture art but a new font and logo are used at the bottom, and a new blurb is inserted at the top.

Not a lot else to report. Just lots of kiddo time as the kids are home for the summer, with little snippets of writing and editing squeezed in.

UPDATE: I have had it suggested to me to add the word "just" to the blurb and change it to, "It's a dark and stormy night, and Armageddon has just dropped in for dinner." Hmmmm....
There is also "is dropping in for dinner" to consider. Sigh...decisions, decisions.

Hmmm...the whiter text in the title might look better too... 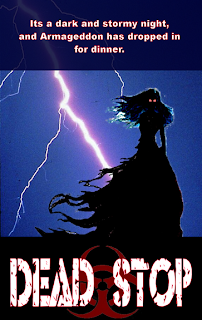 Posted by D. Nathan Hilliard at 8:54 PM No comments: 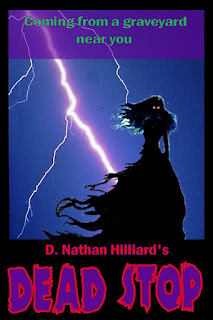 I'm not sure about the wording of the top blurb, but the overall composition is interesting.

UPDATE: A quick glance at other books for sale show the bordered look is out, so lets try this... 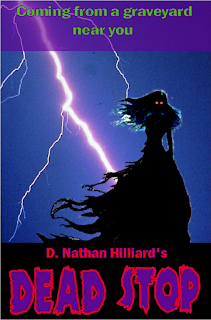 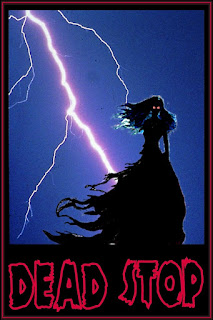 While the editing for Dead Stop begins, I've also started working on concepts for cover art. The above is my second concept, which takes a bit of a different approach than the first. This one incorporates the element of the storm from the story, while the first one used a bloodsplatter against a white background. 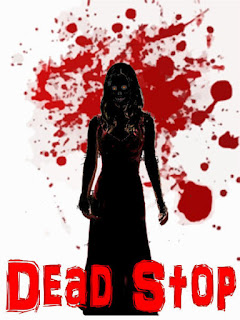 Both utilize the female zombie (nominally the main one that appears in several places in the story) and large ragged fonts in red for the title. They are both comprised of pretty simple elements.  Neither are what I would call true book cover quality. But for now I'm just putting together elements and ideas, and trying to figure out what direction I want to go with this.

And Here We go 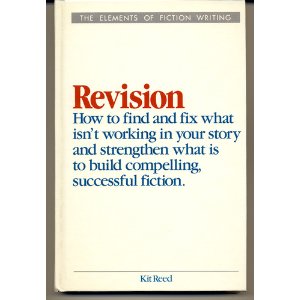 The above pictured book can be found HERE.

So now I'm at the stage where I start going back over my labor or love and identifying all the blemishes. It's not always easy to to, and yet at other times it can be too easy as well. That why any writer worth his salt has to have proofreaders. I will begin with the problems I have found myself, and some that have been identified by a couple of prrofreaders who were allowed an early look at the manuscript before it was finished,

Currently that involves a lot of sentences that were too long, an action by a veterinarian character that both a friend and my veterinarian wife informed me was way wrong, a problem with restating the obvious and beating the reader over the head with some things, and several other character interactions that need work. Apparently, the zombies themselves are a big hit with all readers.

Anyways, this is the part of the process that can be the most painful...but it is also the part that elevates your work from the poor or mediocre, to the polished effort worthy of a readers time. Its kind of like preparing a kid to send out into the world. If you're going to go to all the trouble to have kids, it only seems right you should prepare them so they have every chance to succeed. It's the same thing with a novel or collection of short stories....after you have put all the work into writing the thing in the first place, it only seems logical to make sure it goes out  into the world in the best form possible.

It's just not as fun as writing the thing in the first place. But after doing it a while, you can really start to take satisfaction as it begins to take shape as an obviously superior product to the original. So there are rewards. It's just the gratification isn't immediate at this stage, and I think a lot of us writer types are all about immediate gratification. I know that's been an issue with me from time to time....just a teensy bit.

Anyways, it's this and the cover art to keep me busy. And busy I shall be.
Posted by D. Nathan Hilliard at 3:10 PM No comments:
Newer Posts Older Posts Home
Subscribe to: Posts (Atom)