A Humble Suggestion From A Horror Writer 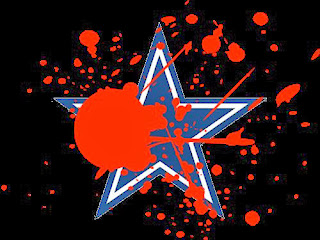 Being a horror writer, I like to think I know a thing or two about the stuff of nightmares. It’s a conceit of mine that I believe that I have learned some things about the things that evoke terror and revulsion in my fellow man…and if I’m not truly an expert on such matters then at least I have a fair working ability to spot the truly horrific when I see it.

Which brings me to the Dallas Cowboys.

One of the primal dreads to be found in Western Civilization is the fear of damnation. While some hold a fiery view of that concept, the reality is that both history and Dante provided us with a much wider variety of fates to choose from. The ancient Greeks gave us Tartarus, where Sisyphus forever rolled his stone and Tantalus suffered from thirst  and hunger while standing in a pool under a fruit tree. And it’s in that vein of prolonged despair that fans of the Dallas Cowboys have found their home.

They can’t win a playoff game. Hell, they haven’t even been making it to the playoffs lately. They can’t crater…because that would at least create the chance that some much necessary soul-searching and self-scouting would be done. Instead they are consigned to this spirit crushing torment of unending mediocrity, forever wondering if the next season will be any different, only to find out it won’t. It’s a hellish absence of hope that any horror writer would love to capture and inspire in his situations.

And after careful study of this phenomenon, I can put my finger on the precise cause of this unchanging delimna.

Every team has a Leader. I don’t mean a leader with a small “L”, because there are several of those in any team. I mean the Leader. Every team has one. And over time, every team starts to take on the characteristics of that Leader. Lombardi’s Packers were champions who had the heart of football and the right stuff to win, Landry’s old Cowboys were efficient with a ruthless focus on execution, and Chuck Noll’s hard-nosed Steelers dominated the seventies. These teams had Leaders walking the sideline, and that is who they looked to for their identity.

The problem with Dallas is that their Leader does not walk the sidelines. This fact is so widely accepted that journalists report things that Jerry says, while often ignoring the daily press meetings with the coach. The problem is that this Leader sits up in a climate controlled owners box and makes business decisions, and over time this is the personality that the team has absorbed. Jerry is a talented businessman and promoter, and you are constantly hearing about how “talented” the Cowboys are.

But it’s hard to have a team that rises to face adversity and harsh conditions when their Leader sits in remote comfort. And it’s hard to be inspired and follow a coach who is not the Leader. You do not look to him for direction…merely to see what play he will call next. His inspirational speeches are ultimately just noise.
So bearing all this in mind, I would like to offer the following solution to the team’s never-ending doldrums…

Jerry Jones needs to fire Jason Garret and assume the mantle of Head Coach of the Dallas Cowboys.

It’s the only hope left.

He will either rise to the challenge and learn the job well enough to lead the team to victory, or finally fail in such an utterly horrific fashion that not even he can continue on in denial. Either way, it will be the team following their true Leader to that destination. It will provide closure to this eternal limbo through which Dallas now wanders. That is something that just bringing in another coach who walks the sideline and hopes that the man upstairs is on the same page with him can never do.

So it’s all up to you, Jerry. It’s time to put on that coaches whistle and walk that sideline. Time to assume the responsibility of Leader that you already get the recognition for.

And if it ends up in a horror show that scars the psyches of football fans everywhere…that’s okay too. At least it’s an outcome. And that’s what Cowboys fans have been waiting for.
Posted by D. Nathan Hilliard at 2:18 PM 1 comment:


I am proud to announce the unveiling of my next project, "Ghosts, Monsters and Madmen."

The cover art is set, and the rough draft has been compiled. There is still much to do before I send it out to proofreaders, but the important thing is that a rough draft now exists.

This anthology will contain a mix of stories previously published by Pill Hill Press, LL Dreamspell, Yours Truly on Amazon KDP, and a couple that are new. It is a blend I hope everybody finds to their liking.