Sometimes You Have To Start With The Ghost 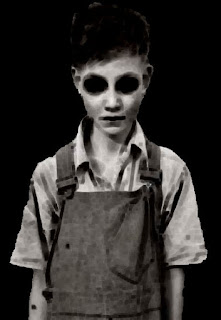 So December has been a bit of an exercise in despair writing wise.

I backed up my deadline to allow me to finish writing "The Dance of the Ancients", but I had also discovered that a story I intended to put in the anthology didn't really count as a ghost story. So there I sat, still a story short. I wracked my brains for a new story, but everything I came up with either seemed trite, forced, or to be blunt...it plain sucked.

Then I remembered how I came up with the story for "A Long Cold Forever of a Night". I started with my ghost, or in that case the photo of the ghost on the cover of the anthology, then built my story around her. So I got out my photo editor, went to old photos from the dust bowl because I knew they would be in the public domain, and started making ghosts. I figured that since it worked once, it was worth trying again. And sure enough, after playing around a little while I finally struck paydirt.

The one in the picture above is the one that inspired a story.

He doesn't have a name yet, but he has a story...now I just have to write it. I still need to work out details such as names of people and places, and a few plot elements, but I already have the general arc of the story in mind. And since this story just hit me about an hour ago, I guess I'm going to count it as a Christmas present from my muse. The lazy little bimbo will now probably take a vacation for the rest of the year, knowing her.

But the important thing is I have story... 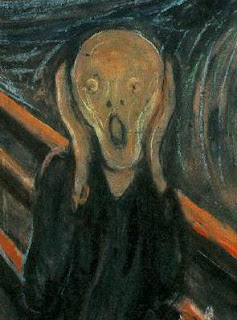 Seven ghost stories have been written, only one remains until I can pronounce the anthology complete and go into full editing and publishing mode.
So naturally my muse has jumped a bus to Cancun....
This is a problem I have started to notice, and wonder if its just coincidence...just me...or a problem that other writers run into. I'm going to call it the "Almost Finished Paralysis".
I get a project about eighty percent done, and then suddenly it gets difficult to impossible. I have a ninety thousand word novel at about seventy thousand words. I have another novel that should be about a hundred and twenty thousand words at about ninety thousand words. And now I have an eight story anthology at seven stories...and just like the two novels I suddenly find myself running into all kinds of resistance.
Do any of you other writers out there ever face this phenomenon?
This is really irritating!
Posted by D. Nathan Hilliard at 6:50 AM 3 comments:

Life Outside of Writing

While I have been productive as of late, being a househusband and a Dad demand much of a my time and attention as well. Of course, it occurs to me that kiddos may be trainable....

Of course with my luck, I'll get the girl trained all right and proper and some nosey jerk of a handsome prince will show up and cart her off to his castle. How is that fair? I do all the training and HE gets his floors scrubbed!

Oh well, I'm going to make a major push at writing over the upcoming weekend and we'll see how that works out. And while I'm at it, maybe I can teach the girl to do laundry :D
Posted by D. Nathan Hilliard at 7:04 PM 1 comment:
Newer Posts Older Posts Home
Subscribe to: Posts (Atom)