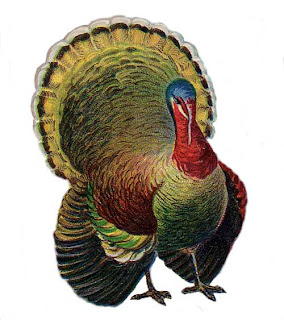 The day that all diets must bow before then stand aside.

For this day is about family, food, football, and togetherness. For being grateful for all the good things that we have, and the opportunity that we have to share them. It's about turkey, dressing, deviled eggs, potato salad, a variety of caffeinated and non-caffeinated beverages, pumpkin pie, and the house smelling so good that it makes your mouth water.

It's the start of the holiday season. It's the Macy's Thanksgiving parade on TV. It's the traditional football games at Dallas and Detroit. It's the battle against the post meal afternoon nap. It's sitting around on couches and catching up with everybody. It's the second helping later in the day, once you have digested enough to make room.