A Few Thoughts On My First Four Novels 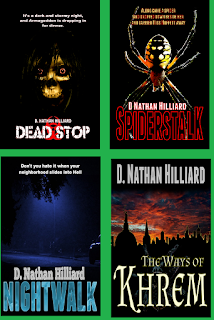 After spending the autumn promoting Nightwalk, and dithering between different future stories, I have finally settled on a project and have started writing it. The process of choosing inevitibly led to me taking stock of what I’ve written so far. Having done that, I thought I would pass along a few thoughts and observations on my previous novels for those who care.

1.      The Ways of Khrem was my first foray into writing. It is arguable whether it counts as a true novel since it consists of three intertwining parts that each stand on their own. The publisher chose to list it as an anthology, but I was never really comfortable with that. It’s intended as one piece and only has full impact that way. It was  my one novel ever done through a publisher, and the things I learned from that helped me become an indie. It’s also my only fantasy novel. Even as a fantasy it already shows the elements that made me realize I would be more comfortable as a horror writer instead. Yet the things I learned about world building, scene crafting, and character interaction have stayed with me from that project.

2.      Dead Stop was my first true novel, and my second indie project. (Shades was my first). I had been having trouble writing Spiderstalk, and despaired over my lack of progress. I needed something finished to get the old confidence up. I decided the best thing to do would be to shelve Spiderstalk and create a novel project with a straightforward scenario and ideas so that I would have a greater chance of finishing it. So Dead Stop was created on the premise of “Write the B-movie that you always wanted to see.” It evolved into more than that as I wrote, but that premise helped me formulate the ideas, character, and structures that became Dead Stop. I wanted zombies that actually made sense, so I researched like crazy until I came up with a model I liked. I wanted the creepy Night of the Living Dead feel instead of the action movie feel so many zombie projects devolve into these days. The important thing was I knew what I wanted to write, thus never doubted the project would get finished. The characters were based on real people I had met hanging out at truck stops over the years, so it felt like I already knew them.

3.      Spiderstalk is sort of my grand opus, at least so far. It was conceived to contain a number of genre elements, but to also deal with a lot of issues and themes that resonated with me. For instance, I wear the exact same braces Adam Sellars wore in the novel, and many of his tribulations with carpets, slanted surfaces, and uneven ground are based on my own experiences. Other personal trivia about Spiderstalk include the fact that Karen Sellars childhood encounter with a corn spider is based on a childhood experience of my own. I know they are allegedly harmless but since then I’ve had many meetings with them in my nightmares. So you might say I was also trying to exorcise an old ghost writing that novel. Spiderstalk is also my first novel to take place in Cole County, where many of my short stories are set. Cole County is part of a larger universe I intend to visit again from time to time.

4.      Nightwalk came about in a similar way as Dead Stop. After Spiderstalk, I was exhausted and used the opportunity afforded to me by getting the rights back to a bunch of my short stories to take a break while I compiled Ghosts, Monsters and Madmen from them. Once I was done with that, I still didn’t feel up to tackling another Spiderstalk sized project. Instead, I went back to my plan with Dead Stop and chose to develop a project based on my confidence in being able to finish it. This time the idea was to write a Lovecraft style novel that could be enjoyed by people who had never read him. There would be clues and creatures to alert attentive fans of HP Lovecraft what kind of book it really was, yet to the average reader it would be accessible as a straightforward monster story with the characters trying to escape. Followers of Lovecraft should recognize a shoggoth, a flying polyp, ghouls, a Man of Leng, and of course, Nyarlathotep himself. There are also Cats of Saturn but since Lovecraft never described those I did my best to flesh them into something he would appreciate. The rest of the monsters were completely of my own manufacture.  Like Dead Stop, Nightwalk evolved as I wrote it and became more than its original premise.

5.      A last note… I have not written any sequels yet mainly because none of the above novels were written with sequels specifically in mind. Some are open ended to a degree, but all were intended to stand as stories of their own. That doesn’t mean there won’t be a sequel to any of them, but I have a firm rule about not writing a sequel until I have a story worthy of its predecessor. To do less would be to sell that story and its characters short.
Posted by D. Nathan Hilliard at 5:58 AM 2 comments:
Newer Posts Older Posts Home
Subscribe to: Posts (Atom)