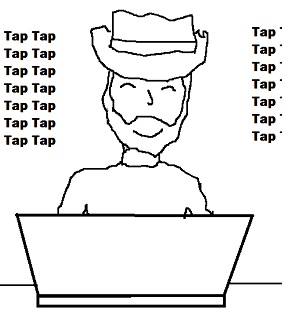 Today has gone well.
I have gotten the Mushroom Man up to 8,644 words, and it looks like it will end up weighing in at about 9,500 words in all. It's turning out to be quite a different story than it's original idea, but I think it's a much better story. It's going to need some serious revision, but there is a good story in there. The character came alive on me and started dictating the plot and mood. I like it when that happens.
So the odds of having a finished rough draft by the end of the weekend have gone way up. Yay!
Tomorrow, I'll be taking care of Rowan while Karla will help Sheridan carve his Pinewood Derby car for Cub Scouts. I think I'll take her out somewhere...that way I can't be used as a witness for whatever happens at home. The combination of little Mr. Eager Beaver, Mrs. Patience, and a sharp instrument are just too much for me to risk. I hope they have fun.
Afterwards, assuming there are survivors, they will take their new creation to the Cub Scout meeting and put it to the test. This week is just for testing and weighing their creations, so they can tweak whatever they have left.
After THAT, I still have to do something for the boy. He got his report card in with straight A's, and his conduct report with straight smiley faces. I suppose you gotta reward a kid when he does something like that, so I'll take him to see Yogi Bear or something like that. I'll have to find out what's playing.
I'm also still enjoying having mobility again :)
So a week that had all the potential to be a complete disaster ended up rather well. Here's hoping the weekend continues that trend.
Posted by D. Nathan Hilliard at 12:22 AM