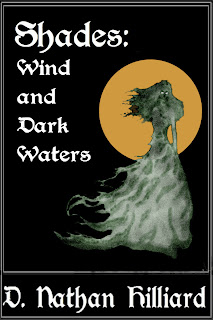 And here is a blue variation, per Cherri's request. 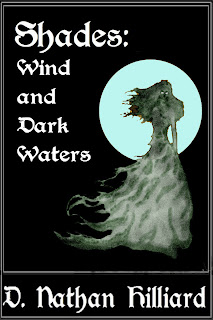 After coming to the conclusion that I should explore the idea of an alternate cover for Shades: Wind and Dark Waters, I came up with the cover above. What do people out there think? You can see the current cover in the sidebar to the right. So which is better? Which has more "oomph?" Please leave opinions or suggestions in the comment area below.

At least something got done...other than folding socks.

What I'm going to do is give all my current projects a read through from either the beginning, or in the case of Argiope, the middle of the manuscript and see if I can get back into the groove of one of them and start "seeing" it again. As I've said before, it's when I'm seeing it that I write the best scenes. If I can't, I might try starting something new. That won't mean I'll shelve my current projects... it's too early to give up and do that. It just means I might write something stupid to clear out the mental blockage. Probably something I never intend to see print.

Or maybe I'll slap a pen name on it and see if the sense of freedom that comes with that leads to anything. Who knows? At this point I'm just brainstorming and trying different things. That's the beauty of this business...the freedom to try new things...and the dress code, of course.

Being Tuesday, it's the first of my "Starbuck Days" of the week, and maybe I'll try one of their soy lattes' for a change. You can't get any more "with it" than that, can you? Seriously, just the name "soy latte" sounds like the beverage of a modern day Hemingway. Just sipping it while typing on my laptop at the coffee shop will bring me a whole new muse. It will make me all cutting edge and cool and make me write stuff that will appeal to modern young urbanites.

Or maybe it will just taste funny. We'll see. Tune in for more tomorrow...same Bat-time, same Bat-channel
Posted by D. Nathan Hilliard at 12:09 AM