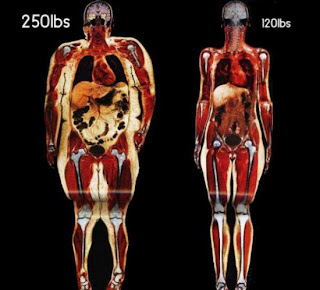 So, my quest to put as much distance between me and the first subject above has started with mixed results. Having that much fat around your internal organs can't be good for you. I've been eating low carb and gluten free the past few days, although I stumbled a little at Denny's last night. I know that you aren't going to see any results this early, at least not weight wise, but at least my head was starting to clear up from the gluten. I think I'm going to have to be more careful at Denny's though because a little bit after the french fries, I felt that gluten fog increasing again. Cross contamination is a real issue with serious gfcf diets, and it makes eating out very problematic. But I need to do it so I can get back to writing effectively again. I just hate giving up all the good food everybody else takes for granted.

I'm playing around with mindfulness meditation as well. I don't really expect anything from it, but anything that gets me more in the here and now can't be a bad thing...right? Cutting out the gluten helps with that too. I noticed I was starting to sharpen up again today after avoiding gluten since Tuesday. I made a stumble in that regard, but I'll just stay on that wagon and hopefully I haven't lost too much ground. I've been extra good and been avoiding the casein as well.

So if I don't get skinny, at least I'll be fat and clear headed soon.

The other thing I need to work on is sleeping. My schedule is currently all messed up. Sunday, I went to bed at noon and slept till seven thirty in the evening. Yeah. That can't last. But hopefully with the kids starting school on TUESDAY, BECAUSE THE SCHOOL WON'T OPEN ON MONDAY LIKE ANY ORDINARY SANE PERSON WOULD EXPECT THEM TO AFTER ALL THIS TIME (twitch...twitch), that maybe that will force me to fix my schedule which will help me be more clear headed as well.