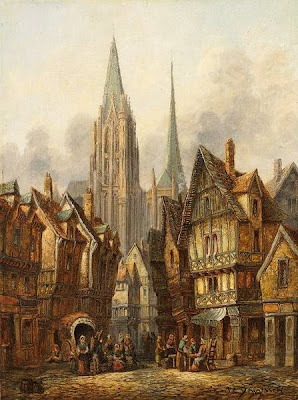 Work proceeds on the rewrite of the "The Ways of Khrem". I've decided to go back to that name since I have a sequel in mind, tentatively titled "The Lords of Khrem." Anyways, thinks are humming along, and at this pace I think I can have the first novella in the book finished by sometime next week.

Anyways, reading the story anew makes me realize how odd it is compared to other fantasy novels. It is set entirely in a city, and the main character is not a great swordsman. He's pretty handy with a knife though, so that has to count for something.

On a different note, after a week of scrupulously sticking to my low carb diet, I have gained two pounds. Needless to say, this was not the desired result. I wonder what happened? This diet has worked for me before. Ah well, it's too early to give up yet, but that is really discouraging.

Oh well, I'm sure there are some famous fat writers out there who I can use as role models. Did Alfred Hitchcock ever write anything?
Posted by D. Nathan Hilliard at 3:56 AM