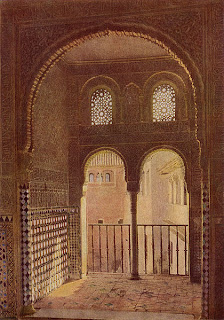 One of the pacing issues with "The Ways of Khrem" was it had a bit of a slow beginning. While things pick up as the story goes along, I learned you need to get your hook in early as I grew as a writer. So one of my goals in the rewrite was to improve the stories greatest weakness . . . it's beginning.

I have taken a three prong approach to solve that problem. I've discarded the long descriptive paragraphs that the story opened with, and put some in little book quotes to begin chapters with. I've also worked on showing through dialogue instead of just giving rote recitations of the events in the beginning. And finally I'm adding a prologue, teasing the reader with the aftermath of an event that happens later in the story.

So far, I'm very pleased with the results. It's still the same story, but it reads quicker and easier.I've given myself a deadline to have this done by the 29th. So far, so good.
Posted by D. Nathan Hilliard at 3:24 AM
Labels: The Ways of Khrem Rewrite