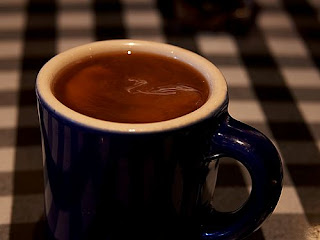 I went out to Denny's last night with Cheri Galbiati. She has been busy lately, fighting off the flu and trying to edit her novel, so it's been a while since we've done our writer's night out.

Thanks to my new diet, no cheesy fries for me. I had a salad and stevia sweetened coffee. Lots of coffee. On the bright side, it was good to have another writer go over some of my recent stuff and give an opinion. She had some useful pointers for "Flight of the Lark."

Hopefully, I'll start to feel the effects of the new diet soon . . . other than the newly upset stomach. That always happens when I first start these low carb diets. Then I adjust and everything is fine.

Now lets hope I can get a little writing done when I get up. I had hoped to have the first draft of my creek story done by October, but that is obviously no longer possible. I just got blocked, and it hasn't been coming. I know what's supposed to happen, I just have to translate the story in my head into words on the computer. Maybe if I can get the gluten out of my system, it will come.

I just realized that the ranch dressing on the salad at Denny's almost certainly had gluten in it. Crap! Oh well, I just ordered a couple bottles of GFCF ranch dressing online. I can at least still have my salads. (I still can't believe I've reached the point in my life where I typed the previous sentence with a straight face) I'll just have to limit myself to nothing but drinks at Denny's.
Posted by D. Nathan Hilliard at 12:41 AM