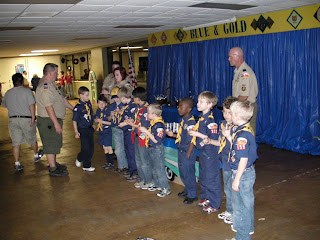 Well, it was a weekend of highs and lows. Pictured above is one of the highs.

Sheridan (third from this end) earned his Wolf rank in Cub Scouts and was rightfully proud. We had gotten a late start on some of his projects, but he's a sharp kid and managed to get them all done in time. Our main job as parents is keeping him focused. The banquet itself went on for a long time, and the kids were practically in rebellion by the time we left but I really couldn't blame them. Rowan especially had had enough. She was very, very good through the first two hours and forty five minutes, but we smelled a mutiny brewing from her direction towards the end and got out of there.

And Rowan really has been doing well lately. She has been more verbal, and starting to pick up on some things that we have been working on her with for a very long time. She's been having good days, and generally been in a good mood. 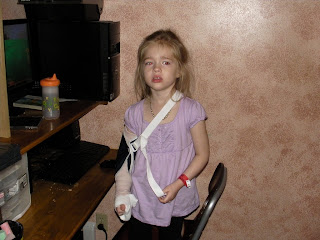 Yep, that's a hurt little Stinkerbell who isn't sure what's going on but knows she doesn't like it. She fell off her computer stool and broke her elbow on the hard floor. I got an inkling it might be bad when she didn't stop saying ow after the first ow, then started crying.  She's usually tough as nails and shrugs off bumps and bruises as just everyday occurences. She kept looking at he elbow and saying "All gone! All gone", which is her way of saying "Make it stop" or "No more". She wanted me to kiss it and make it better, and I tried, but of course that didn't work either so Dad let her down as well. Karla bundled her off to the emergency room, where they spent the next four hours. The kiddo that returned home was not very happy.

She's now in a splint that she hates because it won't let her use her right hand, so she keeps trying to take it apart and get it off. Tomorrow we'll take her in to an orthopedic person and see if they want to put it in a cast. Poor girl, she's been getting good at taking care of certain things lately and I'm worried that this will set her back because she won't be able to do them anymore while she's one handed.

We also have to get Karla's car fixed because her taillights stay on when she turns the car off and runs down her battery. So we'll drop it off at the dealership tomorrow. We also have to get my new braces fitted, so that's another item we will have to squeeze in while trying to get Rowan to the next doctor.

Needless to say, I haven't done much more writing.

Oh well, it's a new week folks. So there's still plenty of time for things to get better.