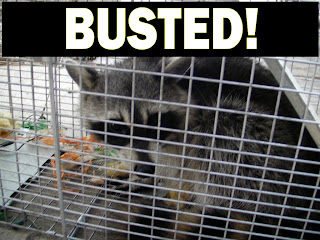 Whatcha gonna do when they come for you...

I got the little bugger thats been having wild parties in my attic and destroying everything. The same little bugger that sounds like he's having his own private Olympics above my head every night. I had caught his siblings many, many moons ago but he was clever and kept eluding capture. No matter how I baited the trap, he managed to fish out the bait without going inside himself and getting caught. It seemed like I was doomed to live with a critter doing gymnastics in the ceiling above me while I slept.

And then he blew it.

Apparently he just got curious and went inside even though there was no bait in the thing. Maybe he just figured it didn't work anymore. Maybe he was feeling lucky. Or maybe he felt guilty for keeping me up nights while trashing my attic and decided to turn himself in. Who knows what goes in the little pointy head of a raccoon? But he had finally screwed up and he was MINE!

Of course, after indulging in glorious visions of coonskin cap style revenge, I decided to let him go. So the wife and I bundled the kids into the car, threw the raccoon in back, and headed to a nearby park. I sort of wondered if he would be able to make it in the semi-wild of a suburban park after living the high life in an attic and living off trashcans. Then I realized he would probably just head straight for the nearest houses to set up shop again. Fortunately there are a lot of houses between my house and that park, so he is somebody else's problem.

And of course, he had to be difficult even when I was trying to let him go. I would open the gate to the trap, but he was facing me and not the gate because he wanted to try and reach through the bars and grab my leg. Each time he would try that he would step on the pressure plate and close the trap again. But the third time was the charm (because I held the gate open) and the little feller headed to happier pastures...as seen below.

So tonight I sleep with a silent ceiling over my head for the first time in almost a year.

I wonder if I'll be able to fall asleep.
Posted by D. Nathan Hilliard at 12:01 AM
Labels: raccoon, release, trap