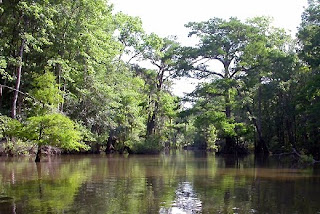 (The excerpt below was written stream of thought style. I have no idea where it's going, or if it's even going anywhere. It's just writing.)

“Paul, wait a minute. Stop rowing.”
“Again?”
“Yes, again. I’m telling you there is something under the water, and I just saw it move. But it’s hard to make out with you stirring up the water too.”
“Honey, there is nothing under there but weeds, turtles, and fish. You probably just saw a gar.”
Cathy bit her lip in uncertainty, not wanting to make a big deal out of nothing. It had been her idea to row their way down Potter’s Creek, feeling that it made a romantic adventure that they could both enjoy. It took a little perseverance to get Paul to take a weekend off from his home accounting business, and it surprised her how much guilt she had to push down for insisting on her comp time at the school. She chose to look at that as proof that they buried themselves too much in their careers, and needed some time away to themselves, out of the reach of calling clients and faxes from officious superintendants.
Paul still grumbled about leaving his cell phone in the Blazer, but Cathy stood firm. If people could manage to go 48 hours without being in instant reach for the centuries leading up to the past ten years, she figured the two of them could pull it off. Besides, she noted with sad affection the number of times he kept putting his hand to where his cell usually rode on his hip only to pat in distress at the empty spot. Stories of animals caged too long rose in her mind.
“You’re right,” she acquiesced with a chuckle, “I’ve just gotten so used to living in the garden paradise of suburbia that I forgot that things out here haven’t been completely tamed, trained, and trimmed into obedient conformity. Sorry about that.”
“Well, it’s farm and pasture land. Not exactly the great dark forests of yore.”
“Ah, but how do you know? All we know about Potter’s Creek is where we see it cross the highway near Hallisboro and then way down at the bridge near Pritchard Hill. That’s over forty miles apart. Think about it, we only know the world around us in strips, whatever is in sight along the road or street.”
“Oh brother, here we go again . . .”
“Oh c’mon, Paul. You know it’s true. Even when you go jogging in the park, you have no idea what’s thirty feet off of the path. And that’s because you never left it.”
“Hon, I’m an accountant, not Daniel Boone. I blaze my trail through the tax codes. Besides, the only thing to discover off the trails in that park is kids getting high. I’m sure they would just be thrilled to see me prancing through the underbrush in jogging shorts.”
Cathy giggled at the image of her paunchy husband driving hordes of stoned teens before him as he thundered through the brush in his track outfit. She leaned back and watched the tree limbs that overarched the creek slide past. Even when the creek snaked through cultivated fields, a tree line was left along the banks. In pastures, the trees thickened in places where one almost had the illusion of being in woods.
Dappled sunlight filtered through the canopy above, casting a mottled pattern on the brown waters below. Other than the occasional rusted can or scrap of paper along the water’s edge, nothing distinguished their surroundings from how they must have appeared a century ago. Twice they startled deer who came to the banks of the creek for a drink, much to Cathy’s delight, and even Paul smiled and started recounting his adventures of younger days at camp.
Posted by D. Nathan Hilliard at 11:36 AM
Labels: stream of thought writing