The Grain is a Pain 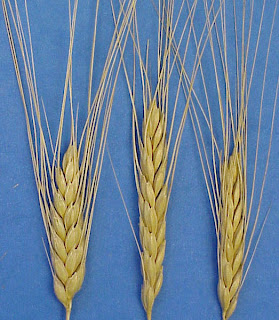 Slightly less than a year ago, we stumbled upon the fact that I was allergic to wheat and gluten. My daughter had to go on a gluten free/casein free diet, and I went on it just because she was on it.

Suddenly I developed the ability to write, my concentration improved, and the chronic fatigue that dogged me off and on all improved. Four months later I had written my first novel. Just like that. It got rejected, mainly because I didn't really know what I was doing yet, but I managed to take what I learned while writing it and used that to be a better short story writer.

Blood tests would later confirm my allergy to wheat and gluten.

So now 11 months after going on the diet, I have nine short stories written, one published, five others accepted for publication, one submitted and awaiting an answer, and two awaiting the proper anthology to submit too. Not bad.

The book "Dangerous Grains" posits the assertion that we all may be allergic to wheat and gluten, to one level or another, because we weren't evolved to eat grain. It's premise is that grain is a recent addition to the diet of a species that evolved to eat meat, nuts and greens. I have no idea as to validity of this theory, not being a scientist myself. I can attest that when I first went on that ancient diet, the results were indeed very noticeable and positive.

I still avoid wheat and gluten, but I'm not as much of a stickler about some things as I used to be. I don't worry as much about cross contamination for instance, such as worrying whether or not a diners french fries were cooked in the same grease as their breaded stuff. The problem is that lately my productivity has fallen off, and I wonder if there is a connection. Of course, I could simply be burning out after having written more than a hundred and thirty thousand words in eleven months. On the other hand, I do find myself staring blankly at the screen more lately. And I have been a little tireder than usual lately.

So I guess I'm going to have to decide whether or not the evidence is strong enough to warrant getting super strict again. Ugh. It's a real pain, and it would cut into some things I do enjoy. I just don't know.
Posted by D. Nathan Hilliard at 11:14 PM
Labels: gluten free casein free diet