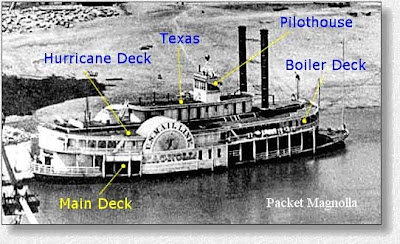 Pictured above is the packet steamer Magnolia. Aside from a few important details, it could be a sister ship of the Lark. The Lark is a packet steamer, but adapted to hauling cotton. It would have extended decking on the front and sides to stack cotton bales on. While it was capable of taking passengers, by 1900 most passengers preferred to take the train.

And thats part of the setting unspoken of in the story, is the backdrop of the death of river travel. In the story, the Lark is running a load of cotton from the Brazos to Galveston. Most of that business has also been taken over by the railroad as well, and the Lark is reduced to grabbing loads from farmers who don't want to wait for the next train. Which is what motivates the Captain to make the decision to attempt to beat a storm to Galveston. Time is a factor, and he needs to unload and get back for another load before the railroad gets all the business. From the Captains point of view, it's a matter of survival.

So he unwittingly sends his ship into the worst natural disaster in US history.

A minimum of six thousand people died in the Great Storm of 1900, and some historians place the real death toll as high as twelve thousand. That large disparity reflects the number of unknown people, and possibly ships, in the area. The idea for the story is that the Lark is one of those unknown craft, and I want to plot it's course through some scenes that are historically accurate.

I realize as I'm working on this story that it isn't really suited for a short story at all. The only way to do this story justice is in the form of either a novella or novel. It needs to be researched further, outlined and plotted out, and more attention paid to characterization. But I really think it is a story worth writing. But I also think the story deserves to be done right, and that's going to take some time and work.
Posted by D. Nathan Hilliard at 7:06 AM
Labels: lark galveston great storm 1900 novella