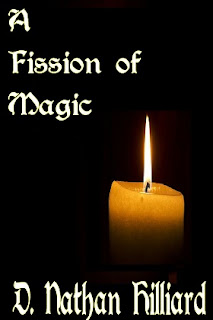 Okay, so I got A Fission of Magic published over at Goodreads. It's free to read. The initial reactions have been positive so far, although this story is far from my usual product. I'm glad people seem to be enjoying it, and it's good to have something published this month. Everybody knows my mantra...production, production, production...but production with quality.

Well, Christmas is kind of cutting into my writing now. Also there is the matter of me having the kids home for two weeks during the Christmas break. I have one short story I'm editing at the moment, but it isn't something that would fit with either of my current series on Amazon.com, so I'll have to figure out what to do with it once it's done. I'll probably just shelve it until I write a couple of other things to bundle it with...or hunt for an online ezine that could use it.

Then there is the matter of me getting into some gluten lately. That may cut into my productivity as well. It's kind of hard to avoid this time of year, and I'm honestly not in the mood to avoid it at the moment. It's Christmas, dammit...and I want to eat like a normal person for a little bit. So there's that as well. I've noticed before how my production seems to fall off when I eat gluten. Sigh. I can still edit though.

So I think today I will start Christmas shopping. Since I don't have any lists yet from anybody, I'll just kind of wing it. I think I'll start at Academy tomorrow. That store has some good stuff, and I can also look over BBQ grills that I have hinted to the wife is one possible present she might want to think about for me...if she is so inclined. So we shall see. The Christmas shopping season is now officially upon us, and with my limited mobility I don't want to face a mall unless I have Karla there as backup...especially if the kids are along.

Then there is also Amazon.com. But I'll have to hurry if I want to use that. Ah well, time to get a few hours of shuteye before the children wake up. Happy Hump Day!
Posted by D. Nathan Hilliard at 2:13 AM