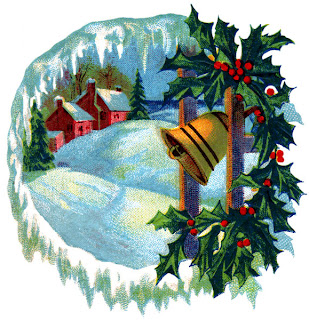 It's one o'clock in the morning on Christmas Eve, and the rest of the family is snoring peacefully away in their beds. Here's hoping they're doing the same thing at this time tonight at Nonni's house. I remember how hard it was as a kid to go to sleep on Christmas Eve. I remember how that clock on the wall seemed to slow to a crawl. But I also remember the magic.

Magic is about the possible. And when you are a child, your universe is still filled with the possible. It's only as we grow up do we start getting taught how much can't be...but as a child, the possible and the real often seemed to overlap.

For I also remember straining my ears in the dark. On most nights, any stray creak or groan of the house could be the movement of some monster lurking in the dark and harboring awful intentions in regards to my shivering young self...but not tonight. No sir, not on this night. This night, those sounds could mean something quite different. Could that be a footstep on the roof? A distant sleigh bell from somewhere in the night sky? A rustle in the living room where the tree stood lit throughout the night so Santa could see? It was possible...

There aren't any atheists in foxholes, and there aren't a lot of little doubting Thomas's on Christmas Eve either.

Then time marches on, and we all grow up and learn how adult life is all about the impossible instead. We call it reality, and we shrug and tell ourselves that we are the wiser for accepting it. Most of us even believe it, too. And then we get on with life and vaguely remember the magic as a distant aspect of childhood while forgetting what it really was...how it was all about looking at the world and seeing it through the lens of the possible.

Sometimes I think it's something we might be guilty of giving up just a little too easily. I know it's harder to find in this modern age of hard science and human cynicism, but there still has to be room to ponder the possibility of something "more." Something better, something scarier, something greater, or even just something meaningful. We have to believe it's out there. And the only way to find it, is to occasionally tell the grown-up in us to shut up, and look out through the eyes of the possible. Because that's where the magic is...

Merry Christmas, everybody...and when you think about the coming year ahead, think of the possible. You'll be glad you did.
Posted by D. Nathan Hilliard at 1:52 AM