On Nate and the Spiders. 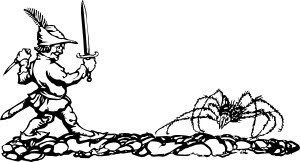 A writer friend pointed out to me that Argiope is not only my second novel, but also my second novel that in some way involves spiders. She made the point that I might want to avoid that theme in whatever my third novel is, just so I don't become known as the "spider author."
.
She has a point.
.
It wasn't ever intended to be that way, but that is the way it worked out. "Argiope" started out as a short story called "Picking Dewberries," which should be available later this year in LL Dreamspells first Nightmare Dreamspell anthology. It was only as I neared finishing the story that I realized I had a much larger story on my hands if I wanted to pursue it. And since it involve my favorite/most feared spider in the world, how could I resist?"
.
As a child I had a fascination and horror of spiders, specifically tarantulas and "argiope aurantia". I used to feed the argiopes grasshoppers, but would have nightmares about being a grasshopper in one of their webs myself. Even as an adult, I had a horror of ever coming into actual physical contact with the things...especially after a traumatic childhood incident where that actually happened.
.
So I guess I ended up unintentionally using my writing to work some demons out. I really don't like the idea of doing that, as it can pollute an otherwise good story with the author's internal hangups. But in this case, since it's just a minor phobia in regards to a specific thing, no harm was done.
.
But my future monsters will be something else. Something that doesn't bother me personally.
.
Maybe big snakes.
Posted by D. Nathan Hilliard at 12:19 AM