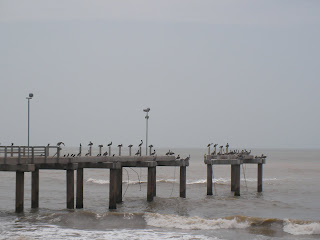 Anyways . . . I'm currently looking at several anthologies to write for. LL Dreamspell has a "revenge" anthology open that I will be keeping in mind. Pill Hill Press has a Four Horsemen anthology and a horror story at sea anthology open that I'm looking at also. Another publisher is accepting stories with a "zombies in space" theme. . . and the wild part is that I actually have a story idea about that too. Of course, I have learned the hard way that an idea doesn't always turn into a story. Sometimes they seem like they would, until you actually start writing them and then discover the shortcomings of the idea itself. That's okay though, because sometimes when you shelve an idea you come up with a complementing idea later that you can combine with the original to actually come up with a story. I have lots of fragments written, which pretty much amount to ideas that simply couldn't carry a story on their own yet.

All of which has nothing whatsoever to do with the damaged pier that I have pictured above, accept it is sort of something being used for a purpose that it was never originally intended for. At least by the birds.
Posted by D. Nathan Hilliard at 3:16 AM