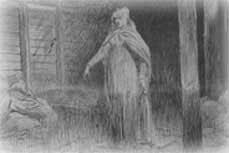 Okay, got the second "chapter", if short stories can be said to have chapters, done. The dream sequence that sets the stage for later events. I made one change from my intended plan as I wrote it, choosing to delay revealing the entire nature of the central figure of the dream sequence till later.

I think it will add punch to a later scene I have planned. That scene had needed something in the way I had it originally planned. Now it will serve the dual purpose of enhancing the sense of pursuit, while at the same time bringing the nature of the pursuer into sharper focus. I'm visualizing this story in "scenes", not as in a movie but more like a Twilight Zone episode.

The dream scene itself still needs work, as it doesn't have the "feel" I was shooting for yet. But that is now an issue that can be addressed in the revision process. For now, I need to keep writing and make more progress with the story. I would like to finish the first draft in the upcoming week, although I don't know how likely that is.
Posted by D. Nathan Hilliard at 2:42 AM
Labels: writing dream pill hill story conquest