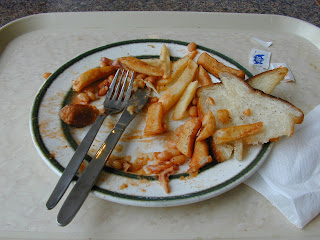 I woke up at 2:30 this morning and couldn't get back to sleep. Coming out to the living room, I found Karla in a similar predicament. Since she had already claimed dibs on the computer, I chose to go out to Denny's and grab a bite.

Something about being at Denny's in the wee hours of the morning causes diets to seem unbearably tedious and counterproductive. In the face of such difficulty, I felt that abject surrender and a plate of cheese fries were the only reasonable solution. The chocolate sundae afterwards might have been a bit much, but by that time things had gathered a momentum of their own. I content myself with the idea that I will come up with some suitable penance later. Besides, carbs make the brain function better . . . or so it is convenient for me to believe at the moment.

I'm now at a thousand words into the recently previewed story. They're still sitting in the graveyard talking, so I'm going to have to wrap that scene up pretty quick. The conversation is important though, as it frames the issues of the story and also the charactors. I'm not too happy with the way the setting doesn't come through though. I'll have to work on that later. I trimmed one of the characters (Russell) out as superfluous. Other than that, progress is coming slowly.
Posted by D. Nathan Hilliard at 6:14 AM
Labels: conquest pill hill story cheese fries Denny's