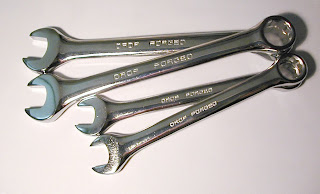 There comes a time that you have to admit to yourself that you have tinkered, overhauled, edited, and revised a story for long enough. I just sometimes have trouble reaching that time. After learning early on the crucial importance of editing and revision, I now have a hard time pushing away from the computer monitor and declaring, "Done!"

Even after having three different proofreaders go over the thing, I still catch myself hunting that last punctuation mistake, trying to improve that last awkward sentence, or trying to tweak the flow that little bit more. As another writer informed me, there's no crime in striving for perfection. . . as long as you don't let it paralyze you in to never letting the story go.

It's just that reputation is important. I want a publisher who has previously done business with me to react with relief and anticipation upon seeing my name on a submission, because they know in advance they aren't getting a poorly written story they have to slog through in their slushpile. It matters. Even if the story doesn't get accepted, it matters.

But now the time has come to let go. And it ain't easy. Because I just know that there is that glaring error in there, that somehow got past all of us, just waiting to make me look amateurish and unprofessional. (Is that redundant?) Ah well, I've got to move on. It's time, and I still have four more stories to write this year.

The deed is done. The story "The Tragedy, 'Man.'" has been sent off to Pill Hill Press for consideration in their Four Horsemen anthology. I refuse to look at the manuscript again, for fear of seeing that I misspelled my name or committed some other horrifically obvious mistake. It's too late now.
Posted by D. Nathan Hilliard at 3:16 PM
Labels: editing indecision revision Pill Hill Press