More About Those Previous 500 Words 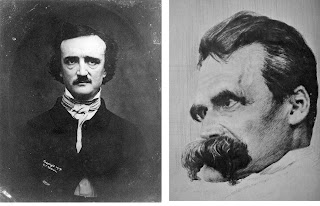 The funny thing about the story that I previewed the other day, is that it's being written with a specific anthology in mind. Pill Hill is accepting submissions for it's Four Horsemen anthology. I had a rather dark idea for a story based on the concept of "conquest", and so that is what is being written.

Basically it's Nietzsche vs Poe.

I'll leave it to the reader to figure out how the theme of conquest is addressed, at least up until the last couple of lines of the story. Then I'll probably go ahead and quote the prevailing author to make it clearer. Of course, I'm writing this at two in the morning . . . and the prose that I'm currently thinking is so well thought out and deep may look like puerile gibberish in the light of day. Ah well, I still like the concepts. I think it'll work.
Posted by D. Nathan Hilliard at 1:47 AM
Labels: pill hill press poe nietzsche conquest