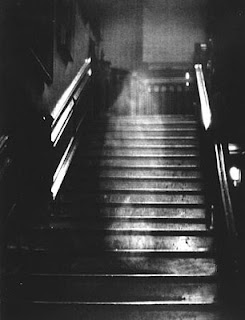 So let's pretend a young bride-to-be is helping her mother-in-law sort through the junk in her attic, when they come across a lovely old wedding dress. The mother-in-law reacts in disgust and tells her that the dress belonged to the psychotic fiancee of her deceased brother, who killed herself and the mother-in-laws brother in a fit of jealous rage. They lay the dress aside, the mother-in-law decides to go shopping, and the young lady takes a nap...

...and awakens to the sound of silk rustling out in the hall.

Anyways, I'm setting Argiope aside for a while so it can simmer on the back burner. I'm thinking about trying to make a "four-pack" of short stories while waiting for inspiration on the novel.

Today is Rowan's speech therapy, so it isn't one of my better "writing days." We'll just have to see if I get anything done.

Rowan is turning into a little computer junkie...who defends her rights to the computer with ferocity. We're going to have to watch that. She didn't even want to get up and go with me to  pick her brother up from school. As far as she was concerned, he liked it there and he could jolly well stay there so she wouldn't have to share. Sigh. Whatever happened to the sweet, loving kids I saw in all the advertisements?
Posted by D. Nathan Hilliard at 9:05 AM