Day at the Zoo 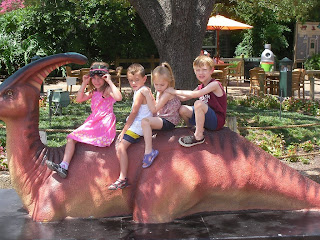 Yesterday, we took the kids to the zoo...along with our friend Charlie and her kids. It was hot, but we were expecting that. I was wearing my white shorts and shirt, in a vain attempt to reflect all the heat somewhere else.  On the bright side, there was a breeze which made things a lot better. The kids also played at the little water park there, and had a ball. Of course, the biggest attraction was the dinosaur exhibit.

What is it with kids and dinosaurs? I guess it's that the beasts were just so darn big and cool looking. Anyways, the animitronic animals got more attention and interest than any of the real animals there.

Also, we decided the time had come to attempt to let Rowan go without a stroller. This was a big first for her, and she actually did pretty well. That has two bonuses...first, neither me nor Karla has to wipe ourselves out pushing a stroller anymore...and second, Rowan is pretty tuckered out from all the walking by the time she gets back to the car. No more easy riding for her!

I've also been getting some work done on a short story. I'll post the first seven or eight hundred words later today.
Posted by D. Nathan Hilliard at 12:23 AM