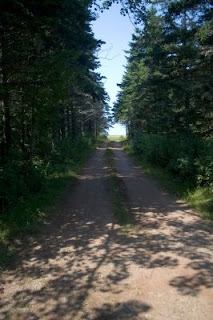 I have five stories "accepted", so to speak. Four for publication in anthologies and one for critiquing at Apollocon. Three are horror stories, one is a mystery, and one is a strange cat story/horror hybrid. Taking stock of them, it's interesting to see the choices of setting I ended up going with.

The four accepted for publication stories....

"Rite of Passage" takes place in an abandoned retirement home in a small town.

4 out of 5 of the settings are rural...and the one that is in town is from the POV of a cat which in a wierd way can be argued to make it rural as well. So far, rural has worked better for me. Also, two of the five take place in the past, and since the cat story doesn't count for this, it probably should be two of four. Horror is a little easier to write in the past because there aren't all those pesky cell phones connecting everybody, although I'm really pleased with myself in how I managed to use cell phones to enhance the situation in both stories set in the present. But modern technology has to be accounted for because they are part of todays setting. It's a challenge, because you have to take into account the reasonable actions a charactor may take. I hate it when charactors do unreasonable things just to make a story work.
Posted by D. Nathan Hilliard at 8:26 PM
Labels: writing setting horror modern