Back From the Convention: Day 3 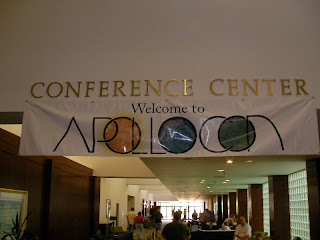 After sleeping a solid seventeen hours (I needed it), Karla decided to wake me up and get me on the road back to the convention.

Attended a few panels today as the convention winded down. The one on copyright made for an interesting discussion, especially on the digital front. A lot of the kiddos I spend time on bulletin boards with feel that "information should be free", a sentiment viewed with mixed feelings by todays panelists. My sympathies lie with the panelists. Any information I create should be pricey as hell. There were some other copyright issues discussed, and an idea put forth that I will need to bounce off of people on some of the authors list I subscribe too.

The panel on activism and the convention community was okay, but I had gone in under the impression it was about sneaking political messages into your writing. Since the topic was nowhere near that type of sneaky skullduggery, I admit I lost interest. The last panel on architecture of the future, and the materials that would be used was interesting...but I wanted to hear more from the panelists and less from the audience on that one. Sometimes audience participation gets in the way of the dissemination of good information.

Altogether a successful convention since I found it informative and met some cool people. My congrats on the organizers of this convention for keeping it well organized and having the panels appear when and where they were supposed to be.
Posted by D. Nathan Hilliard at 3:04 PM