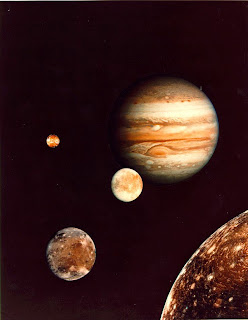 The first draft of "Jupiter Rising" is finished. One wouldn't think that a mere 500 word or less short story would need to come in drafts, but I've already made a couple of corrections and applied a little polish so I know better. I'll stew over it a couple of days before submitting it to Quick Fiction.

After that I will have to decide whether to start another short story or go back to work on Argiope. I'm pretty close to mentally working out the problems I had the first time around...but I'm not quite there yet. Yeah, I know...Mr. Decisive here can't make the call.

Perhaps I'll actually break down and critique those three short stories for Apollocon. They're all rather good, so this isn't going to be easy.

Speaking of Apollocon, I start my diet when I wake up today. Three weeks of brutal deprivation, designed to help me walk without panting at the convention itself. Sigh, you would think being an author would mean you're allowed to be fat. Ah well, I still like the dress code.
Posted by D. Nathan Hilliard at 4:31 AM