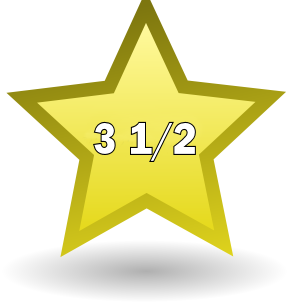 So it rained, and we didn't go to the weekend camp out...but took the kids to the movies instead. It was our first attempt at trying Rowan in a real theater. She didn't do bad, but I'm not sure she's quite ready yet. Even with lots of animated characters on the screen, she started getting restless before the movie was over. It went well though, and we all had a good time.

The movie we saw was Rango.

Rango is the latest addition in a recent string of animated movies to hit the screen. It's actually a decent movie that suffers from the fact that it can't help but be compared to a recent crop of truly superior animated films like Tangled and Megamind. Having said this, it does a fair job of holding it's own.

It's basically the story of a city lizard in a terrarium that gets left out in the desert after it's owners have a near car accident and it wanders into a faded western style town of desert critters of different species. Up until this point the lizard has been having little plays it holds for itself with assorted props in it's lonely terrarium. Now he has to find an identity of his own...so naturally he makes one up. He pretends to be a super tough gunfighter to impress the locals and through a series of slapstick misadventures manages to become sheriff. Of course, the town comes to depend on him to solve their problems and he has to deal with the fact that his legendary prowess is just a figment of his imagination.  Real bad guys show up, and you can guess the rest.

I think what was frustrating to me about this movie was I kept thinking it was about to get better than it ever really did. For instance, there were these four little owls that showed up briefly in various scenes and acted as musical narrators. They were okay, but I think the creators of the movie really dropped the ball with them because they could have been so much better. A couple of other characters were like that too. You just expected them to do a little more with the character they created, but somehow they came up just a tad short.

That aside, the movie is worth seeing. The animation is fine, the voice acting is fine, the look of the town is right, and the story is good. The gags are pretty good, but again they are one of those things you keep thinking might have been done better somehow. Overall, I recommend it...and while you won't feel cheated if you have to pay full price, this is one I would lean towards recommending matinée prices instead.

Anyways, Happy Monday folks. May all you get off to a glorious start on your week. My, I am going to dedicate this day to writing.
Posted by D. Nathan Hilliard at 12:01 AM