Movement in Horror (stream of thought) 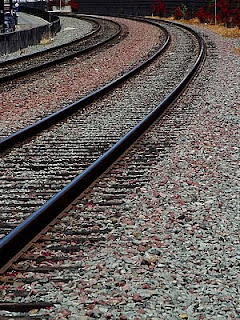 At Apollocon, somebody complemented me on my story, "Rite of Passage", by saying "That was a great story of somebody going where they should not go." That sentence got me thinking.

Isn't that pretty much what horror is all about?

I did a quick inventory of my horror stories and realized the above line pretty much applied to all of them but two, "Designated Driver," and "Closing Time." And in designated driver, the protagonist is going somewhere. The difference with "Closing Time" is the bad thing came to the protagonist.

So there is that movement in horror. The victim approaching the bad thing (usually unaware), or the bad thing coming to the victim. Most horror movies I can think of tend to utilize the former recipe, although a few good ones have used the latter.

Maybe that's why setting is critical in horror. The threat more often than not is directly connected with somewhere the protagonist goes. That there are "bad places" out there, which are better left unentered. Some look mundane and unthreatening, while others are the classic ruin of gothic literature. Each have their own attractions.

I just never had broken it down that way before. I wonder if it is a useful point of view that could help me write, or just another bit of sophistry with no practical application. Ah well, it was something to muse over tonight.
Posted by D. Nathan Hilliard at 3:32 AM