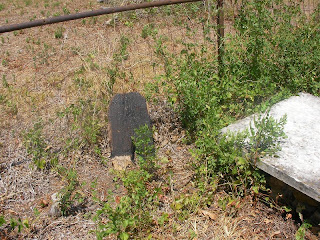 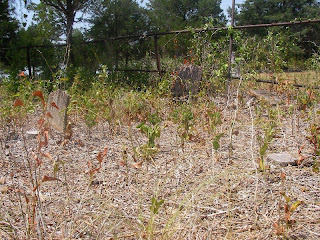 My parents and I visited the site of Port Sullivan along the Brazos River. All that remains is a graveyard, on the bluff overlooking the river. While parts of the old graveyard have been cleared and restored, other parts lie buried in the brambles and woods. It's also obvious that over the decades of neglect it has been visited by vandals from time to time. There are tombstones knocked over, and some broken.

The oddest thing though were the burned grave markers. I didn't know that they made tombstone shaped markers out of wood in the first place. But even weirder, somebody had obviously set some of them on fire. I thought for a second that maybe they had gotten charred in a grass fire or something like that, but you had charred markers sitting by unburnt ones. So this was most definitely due to a selective act of petty arson. It conjured a rather eerie image in my head, and I might be using these as a basis for an upcoming story.

It was also revealing to stand at the edge of the graveyard, which is also at the edge of the bluff, and look down across the river bottom at the river itself. I had operated under the illusion that the steamboats docked at Port Sullivan itself, but that must not have been the case. The town didn't set right on the edge of the river, but on a rise a little ways away. They must have heard a steamboat bell or whistle and then went down to the dock by the river.

Overall, I think the trip was a success. I got a lot of good input and impressions, which is what a lot of writing research is all about.
Posted by D. Nathan Hilliard at 7:14 PM
Labels: port sullivan graveyard charred markers