A Landmark Too Far 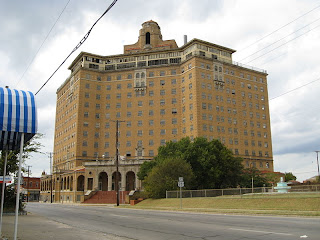 As I have mentioned before, I joined a writers group called The Final Twist. Once a year they put out an anthology of short stories written by the authors in their group. This year they theme for the stories they are accepting is "Texas landmarks". In other words I can submit a story to them for consideration into their anthology, but it has to use a Texas landmark as it's setting.

Pictured, is the setting I would be very interested in using. It's the Baker Hotel in Mineral Wells, Texas. It's an old hotel that was visited by golden age Hollywood stars like Clark Gable, Judy Garland, The Three Stooges, Roy Rogers, and Lawrence Welk. Now it sits, an abandoned hulk, in the center of Mineral Wells.

I have a the rough idea of what could be a decent story, using this hotel as a setting, but I would need to visit the place first. I need to walk through it, get a feel for it's layout, and it's current condition. Since the story in question is a mystery, I would need to know several key features of the place. I would want to take pictures of the things and charactoristics that would be important to the story. Probably a little video too.

A well, the earliest I could possibly head that way would be sometime in September. And that wouldn't give me much time to write the story. At least if I intended to make the anthology's deadline. I would have to write fast. It's still worth visiting though. Between now and then, I'll try to think up a landmark closer to home.

Drat! When looking through the Baker Motel website, I discovered that they no longer give tours, by order of the Fire Chief. Oh well, it was an idea.
Posted by D. Nathan Hilliard at 1:41 AM
Labels: baker hotel writing field trip.