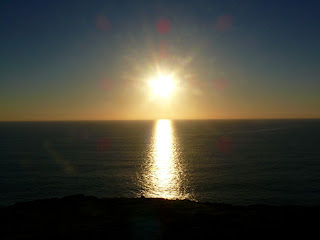 Lately, I have been asked if I intended to write another novel, or if I was just going to continue on with short stories. I've been thinking about that, trying to give that question the thought it deserves. After all, it's a question that I need to answer for myself as well.

My first attempt at writing was a novel comprised of three novellas. It was an act of enthusiasm, daring, ignorance, vanity, and hope. Naturally it got rejected. And as I learn more about the field of writing, I can see the rejection was entirely justified. Fortunately, during the period of time between my finishing the novel and it's rejection, I also wrote a couple of short stories. Those were accepted. The acceptance of those stories mitigated the disappointment of having the novel rejected, and also gave me the perspective to stand back and learn a little from my experiences so far. The first thing being the realization that the short stories had benefited from the lessons learned while writing the novel, even though the novel failed. A few more accepted short stories later, and I'm beginning to get the barest grasp on what I'm doing.

And that's the important thing I've come to understand. I'm a novice at this, and it's important I take that role seriously so that I can do it right. I'm learning. I'm building both a knowledge base and the ensuing confidence that comes from knowing what you are doing. So right now, I'm focusing on short stories. I'm learning the techniques, the market, the business, and the people from the relative safety of the short story writer.

I do intend to attempt novels again, including a rewrite of my first one. But as I learn how much I don't know, I want to be sure and be ready for my next attempt. I want it to be a more focused and thought out attempt next time, based on a better skillset and greater amount of knowledge about my craft and the business.

So for the rest of this year, I'm going to focus on short stories. That gets my name out there, and it also has me doing business on a much more frequent basis with other writers and publishers. This helps me build up that aforementioned experience and confidence. I challenged myself to write 12 publishable short stories this year. I will focus on that, and reevaluate my objective at New Years.
Posted by D. Nathan Hilliard at 4:57 AM
Labels: writing short stories novels future