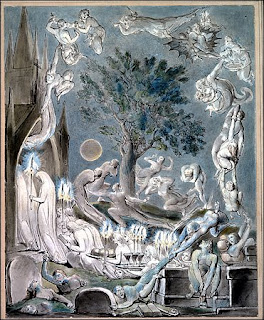 I'm currently working on trying to finish a short story before the end of the week. It's another ghost story, called "Closing Time", and one that I'm hoping to submit for a future ghost story anthology that I've been told that LL Dreamspell will one day open for submissions. That one and "Rite of Passage" will give me two in the wings so to speak, for whenever the anthology opens.

After that, I suppose I might try a change of genre.

It's just that ghost stories seem to be what occur naturally to me. I guess it's the result of terror filled nights as a kid, waiting to see what horror would be stepping out of the closet. But you couldn't keep me away from those saturday afternoon matinees on tv during the day. I lived for those things. Then when I ran into some setting later, my horror movie fueled mind would inevitably create some grisly scenario just so I would feel a little uncomfortable there. And from those imaginings the stories spring. The ruin in "Rite of Passage" is really the old retirement home that used to be in Cleburne Texas that I skulked around as a kid. The store in "Closing Time" is the little convienence store I used to work in while living in Round Rock. Even "Designated Driver" is based on my imaginings while driving home from the cotton gin in Jonah late at night. "Picking Dewberries" is exactly that, a memory of hunting dewberries on the sandy back roads of my youth, and the imaginings that kept my young self nervous when near the fence.

I find it no coincidence that the one short story I've had rejected is one that has absolutely no autobiographical elements whatsoever, and one that I was trying to be clever and crafted wholesale with certain writing strategies in mind.

I suppose that's why I want to take field trips and visit new settings. Just to let my mind absorb them and do it's thing. It's more natural that way and I write better stories.
Posted by D. Nathan Hilliard at 2:04 AM