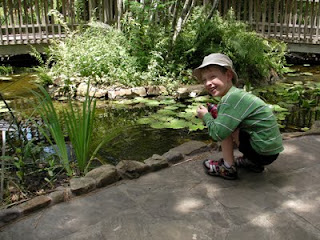 Rowan's session at Learning Lane was going to be an extra hour long today, so we had three hours to kill instead of two. I decided to take advantage of that by taking Sheridan to a more distant destination than normal, and this time we spent our time at Mercer's Arboretum. There weren't any ducks, but there were other things to fascinate the young mind and draw his attention.
As a matter of fact, we hit jackpot in the first fifteen minutes. While I stopped to do some filming on another project, an armadillo wandered by.

Then later, as we were going by a fish pond, and employee came out to feed the fish. The lady was very nice, and put some food down so Sheridan could feed the fish (and the turtle) himself. He loved every second of it.

A nearby colony of ants caught wind of this activity and started raiding the pile of food themselves. Sheridan got almost all of the food out to the fish, but the last few pieces were seized by the ants. Sheridan and I observed as the struggled to get their ill gotten gains home, and he had a couple of observations about ants.
And then it was time to get Rowan.

She had her own idea of how to enjoy the rest of the afternoon.

After a long session at school, she couldn't think of a better way to unwind than to go to her favorite summer hangout...the pool in the back yard. That's a contented little girl finishing off her day right. 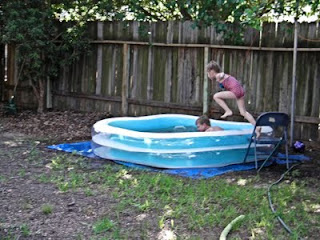