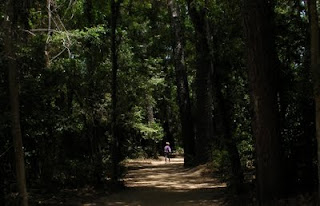 With Rowan having the second of her two scheduled long days at Learning Lane, Sheridan and I returned to Mercer's Arboretum. This time we came in a more exploratory mood, and struck out for the far end of the park. On the way, Sheridan made commentary and offered names for the sights. 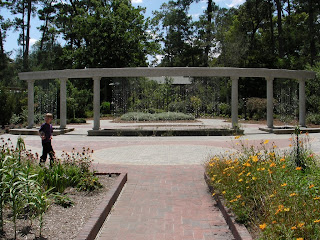 Although it's hard to tell without clicking on and blowing up the picture, the above structure is actually a fountain. Sheridan loved it and called it The Third Gate of the Heavens. I have no idea where he pulled that name from. 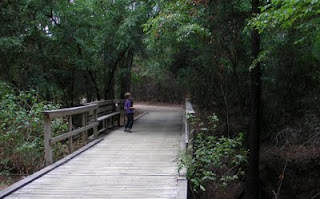 Then further back in the park, we crossed what he concluded was a decidedly creepy gully. The place did have a certain feel to it. It made me think of a gully mentioned in Ray Bradbury's Dandelion Wine. 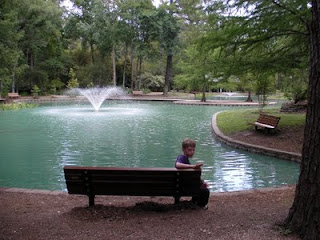 Finally we arrived near the back part of the park, where they have a pond and a "tea house". At this point I was seriously lagging, and Sheridan had to curb his youthful enthusiasm for venturing onwards in order to give the old man a break. It worked out for him though, because he got to see a swimming turtle. And we did go on to the tea house after a breather.


So, it's been an eventful week, with one more day yet to go. I bought them a Slip'n'Slide and some kind of hopscotch game you hook up to a water hose, so I figure tomorrow will be featuring the back yard and a lot of water. I shudder to think of our water bill this month.
Posted by D. Nathan Hilliard at 11:13 PM