Father's Day rolled around, and do you know what my wonderful wife did? She told me she would be taking care of the kids all day, and booted me out of the house under strict orders to do whatever I wanted. So I thought about it...and this is what I did. 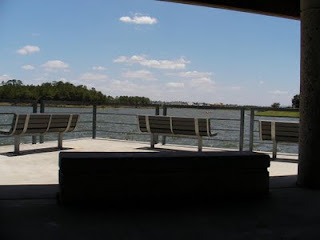 I went to the lake.
I got me a couple of large bottled waters, and just plopped my butt on the pictured bench above. And there I sat for the rest of the day...just watching the lake. 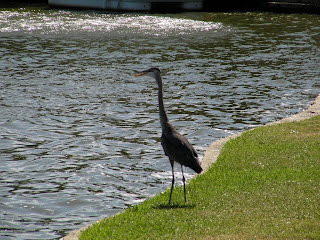 I watched a large bird...either a heron or a crane...do pretty much the same thing I did. He stood there at least two hours, looking out across the waters. 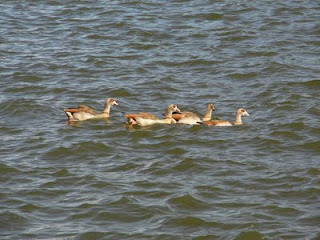 And there were ducks. A myriad of ducks of many different breeds. I wished I had a bird watchers book with me so I could have identified the ducks. 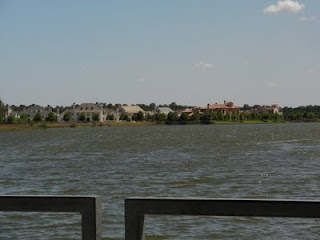 And I looked across the lake and gazed at the large houses on the far shore. 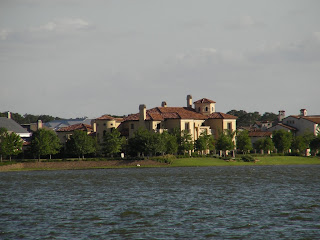 Many of them were grand structures, like personal palaces built by people who live on the far shores of other things than just a lake.
I don't envy them...but their houses are nice.
So I sat there on a bench, and watched the lake go through the day. I saw people come and fish, and others paddle by in little canoes. Squirrels dropped by for a little playtime and chased each other around the little pavilion I occupied before heading off to their next activity of the day. And I realized something....
You don't really see a lake until you sit down and watch it. It doesn't exist in a snapshot, but as a living thing in motion. You have to take the time to watch it breathe.You have to see it go through it's day to see it for what it is...and even that is nothing but a bigger snapshot.
Overall, I had a great Father's Day...despite acquiring a significant sunburn...and wouldn't have done it any other way.
Posted by D. Nathan Hilliard at 10:22 AM