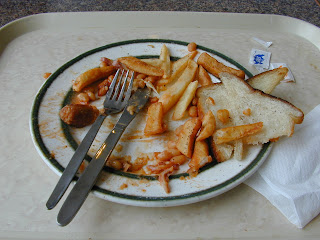 When in doubt, turn to french fries.

Alas, my writing buddy is down with a bug so I had to go this one alone. So here is a shout out to Cherri, hoping she gets to feeling better.

My problem was that I had left a couple of tiny "logic bombs" in my initial scenario that lay there ticking up until I got to a certain scene. As the story goes on, I was going to have a harder and harder time justifying the actions of some of charactors due to that. My antagonists have certain abilities and needs, and a major scene in my story was beginning to develop at odds with what those charactors would logically do. I had to go back, rethink a few basic premises, and make some decisions on which things needed saving...certain premises or certain scenes.

The process isn't complete yet, but at least it's far enough along that I can go a little further along in my story. I may have to go back and change the gender of an already introduced charactor though. I've already had to go back and change the location of a minor charactor. But hopefully, most of these changes will only affect scenes yet to come. Going back and revising already written scenes is a pain, especially this early in the process.

But hopefully, this will prevent me from writing myself into any more corners.
Posted by D. Nathan Hilliard at 8:13 AM
Labels: writing revision fries charactors logic premise