Running Out of Story...and Other Writers Blocks 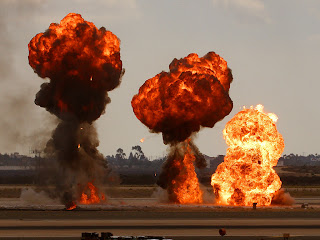 Last night, I did something interesting. I was humming along, my fingers flying on the keyboard, when...

I just sat there, staring like an idiot at the screen, with no idea what was supposed to happen next. I realized I had visualized the story up to this point, and then nothing but vague generalities beyond that.

This was a disaster!

Not just because I wasn't producing material, but because it was during prime writing time. It was late at night, the wife and kids were in bed, and I had the house and computer to myself. It being Thursday night meant I could stay up later because I could go back to bed for a while after getting the kids off to school.

Have you ever tried writing when there are conscious kids in the house?

It's like trying to write while ignoring a ticking bomb in the house. Only this bomb won't exactly explode when it goes off. It will stuff your socks down the toilet and flood your house instead. Or there was that one time the three year old got into the egg carton and decided to have her own Easter Egg hunt. She should have been gentler in placing them.

Yeah, that was lovely.

Anyways, I suppose I may have to break down and cheat...which is what I call outlining since I usually write "by the seat of my pants". I got a schedule I need to maintain, and I can't be losing those prime writing hours.
Posted by D. Nathan Hilliard at 1:28 PM