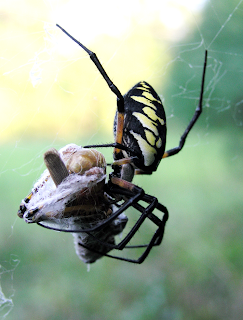 The current story I'm working on is giving me fits.

Never before have I strained and fought so much with one tale. And the fight this story is putting up is showing in some irritating ways. It has grabbed a constant piece of my attention, and it won't let go...I'm guessing until I either figure out it's issues, or set the damn thing aside.

Last night, it interfered with my ability to do a proper critique of my writing partners work. I kept catching my attention coming back to the issues I was having with this story, instead of addressing the conversation I was currently in. And that is embarrassing.

So I think I may need to double down and really focus on this story, and then lay down some ground rules when it comes to writing them in the future. I think my first problem is that I put pen to paper (or fingers to keyboard) before I had truly had a story. I had a premise, and some interesting (or graphic) scenes that that premise made possible, but I really didn't have a story and an ending. And now I'm 12,000 words into the story and trying to work some of those issues out.

Don't get me wrong, I have let stories write themselves before. But even in those cases I had a mental image of a couple of basic things. Like how the story was going to end, and the key elements. This time I started without a few key pieces, and now it's giving me hell.

So, I'm going to hole up and brainstorm for a day or two and focus on settling those elements before resuming. There are just some things you shouldn't have mental energy devoted to when you are this far into the story. They should already be worked out, even if on a general or hazy level, before you get to far into the story. That way I'm not struggling with them, and I can free up mental cycles for other things that I need to be doing.

I also need to review my protagonist a little bit. His flaws seem to have overtaken him, and I need to back those down a little. Sigh. And I haven't even gotten that far into my first draft either. I have a feeling that this story can be good, but that I'm going to be glad to have it in my rear view mirror.
Posted by D. Nathan Hilliard at 7:33 AM
Labels: block outline charactor protagonist story