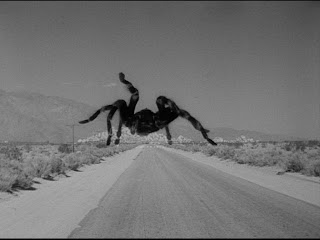 There has been a trend of remaking movies lately, and a few specific examples come to mind.
Godzilla, The Fog, and The Haunting probably represent good examples of my point.

(I would also like to add another movie on my rant list, "Eight Legged Freaks". Although not a remake, I still unconsciously compare it to Tarantula, which is what I was hoping it would be)

These were all remakes that had much larger budgets than their predecessors, and on top of that had access to a new technology that literally lets you put anything you can imagine on the screen...CGI. All were free to display their monsters and haunts in full splendor, without any constraints. And they did.

But an odd thing happened. The movies fell short of their predecessors. Now a lot of things could contribute to that, but I sort of sensed the presence of CGI to be a huge contributing factor. It seems that when you have the ability to "show anything", many filmmakers go straight to doing just that...without ever asking if that's really a good idea. You would think their writers would know better.

A writer has always had the ability to "show anything", and is constantly weighing the value of what to display and what to keep hidden. He has to appreciate that those decisions dictates the very type of story his piece will turn out to be. As the old maxim goes, "Just because you can, doesn't mean you should."
Posted by D. Nathan Hilliard at 11:28 AM
Labels: CGI spider writing ghost movies monster