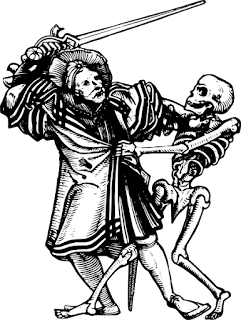 I have now reached 147,000 words, and I've just started the first sentences of the climactic battle in my latest novel. It has taken me three years to get to this point in this particular manuscript. But now the headaches really begin.

In a fight scene like this, time slows down and things get very complex. The writer has to follow the actions of the character and the antagonist, their reactions to each other’s actions, and yet also maintain enough sense of the world around them so the reader can put the action into context. And this is if you only have two combatants.

There are a lot of decisions to make on how as a writer you are going to approach  such a scene.

First of all, you need to decide what point of view the scene will be witnessed from. A third person omniscient POV of the battle will be very different than a first person or limited third person. I prefer to sit down into the characters head to witness the battle, as this brings the reader right down into the action. The challenge to this is that the reader gets no more information than the character has, and in certain types of battles that can be limited, fragmentary, and confusing.

One possible solution to this I have found is the presence of a witness character whose perspective I can jump into, to give the reader a little needed oversight of the situation. In Dead Stop I did this by having Rachel witness the beginning of Harley and Marisa’s run for the mechanic’s shop from the roof.  This still gives a believably limited POV but from a perspective that can give the reader a wider view of the “battlefield”. But also remember that a character brings their own "color" to the scene they witness as well. I originally planned to have Deke witness that run, before deciding that Rachel provided the better filter for that scene.

Another solution is two have multiple combatants and switch between POVs during the battle. This has to be done with extreme care to avoid confusing the reader. I have found that you should always stay in the same POV, and not change unless you’re starting a new sub-chapter that is clearly separated from the previous. In Dead Stop, I even labeled the sub-chapters with the name of the character the POV was being experienced from. I just don’t think you can be too careful in that regard. I’m not sure if I will do the same with this novel, but it is under consideration.

So POV is a big issue.

The other is the mechanics of the battle itself. Sometimes as a writer you have a vague idea of a battle only to have the scene you had envisioned fall apart when you actually start writing it. It turns out that when you go into the step by step process of following the battle, you discover the scene you had envisioned was never really thought out and actually wouldn’t work. For instance, once you get into following the step by step actions and decisions a character makes, you realize he would never put himself in the position necessary for the scene you imagined to function. Then you have this conflict of character integrity vs this awesome scene you imagined. And this can happen multiple times in just one scene.

This is actually what I’m dealing with at the moment, and the way I decided to handle it is to outline the scene itself. Since I'm dealing with more than ten different combatants in four different factions, I can see no other way to do it. This should hopefully allow me to encounter the problems with the scene ahead of time, and tweak them before simply writing that far and realizing I’ll need to back up and throw out several pages of writing so I can go in a different direction.  I hate it when that happens. I bet other writers hate it when that happens.

Annnnd there are now less than two weeks left until the kiddos are home for the summer and my writing time evaporates. That’s another deadline I wonder how many writers out there contend with.

Oh well, on with the big showdown…I hope!
Posted by D. Nathan Hilliard at 4:20 AM