Look Ma! I Published Something! 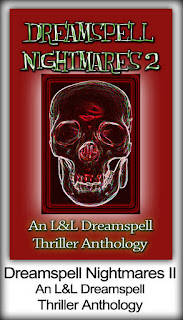 Today, LL Dreamspell announced the release of their latest horror anthology "Dreamspell Nightmares II."
I set a personal best in this anthology, by getting three different stories accepted for it. And I feel they are three of my better short stories.

The first story is "Closing Time". It tells the tale of Erin, who discovers that some stalkers are tougher to shake than others...especially the dead kind.

The second is "Rite of Passage". Some people feel this is one of my more frightening works, and it received high marks at the writer's workshop at Apollocon where I had it critiqued. This is actually an earlier work of mine focused on mood and setting, along with back story.

The third is "Under a Racer's Moon," which is a bit of a layered work...and also has a touch of humor thrown in to balance things. Two young men are out looking for excitement, and find it in a big way when they find themselves in a race with a spectral De Soto.

Anyways, it feels good to see this come out and I hope everybody enjoys it!