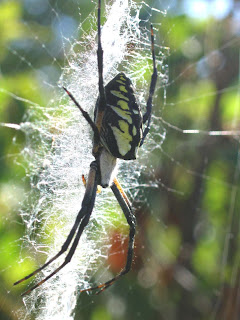 After a quick read through, I started working on Argiope again.
.
It wasn't easy.
.
I had shelved the project just as I started the scene where a large gunfight breaks out in a hospital. Kind of a difficult place to hop back in and start writing. The thing is, "Argiope" has quite a few of those places since I'm only thirteen thousand words into the story and I've already had two people eaten, two people blown up, and another shot in the women's bathroom.
.
And now the action picks up as "Maggie" and her silent partner engage a squad of six police officers that are between her and the protagonist she has come to kill. This is a complex scene (which is probably why I shelved it here), as I have to keep track of the movements of six officers, Adam Sellars (the protagonist), Maggie, and her friend. And probably a nurse or two, and a patient who attempts to be a hero.
.
My approach for this scene is to break it into little chunks, hopping from one charactor's point of view to another in little mini-chapters, to give the scene a more hectic and frenetic pace. We'll see how that works.
.
And I'll learn in the future to shelve projects at a place where they are easier to get back into.
.
Oh, and I'm typing this on my HDTV display again. It makes me feel like an evil genius in his secret lair...working in front of his master view screen. MUAAAHAHAHAHAHAAA!
Posted by D. Nathan Hilliard at 12:20 AM