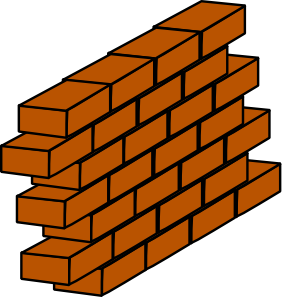 Following the example of my son, it appears that my muse has also done a header into a large brick object.
.
I spent the day staring at the screen, debating how badly each lame idea that appeared really stunk. It was pretty unproductive, to say the least. I've reached a scene change, and now I can't come up with what the next scene should even be. I know what I'm trying to reach, but my original idea is boring and kind of lame so I'm trying to rewrite the idea in my head before writing it the first time on paper.
.
Make sense?
.
I didn't think so.
.
So maybe a day off is in the offing. And if that don't work, then go back and do an edit of what I have so far. That's always a good use of time. I still have a proofreader or two to hear from, so I might just do that. I'm also beginning to wonder if this thing is going to make a full size novel, or just a good sized novella. It's a little too early to tell, but I think content wise it does have the ability to be a novel.
.
Oh well, the lady who helps me clean the house comes tomorrow, so I will have work to do anyways. Funny how that works out, too.
.
Sigh.
Posted by D. Nathan Hilliard at 12:03 AM