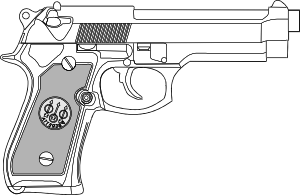 Well, I have added two thousand words to Argiope...and it's all gunfight. The shootout in the hospital is one of the bigger scenes in the book, so I knew this part could take a while.
.
This scene serves several purposes. It keeps the action level of the book high, and it also reinforces how dangerous and strange the forces arrayed against the protagonist are. It introduces an antogonist currently named Maggie, and demonstrates to the reader what a formidable threat she is. This will help make her reappearance later in the book a more tense and suspenseful event.
.
After I finish this scene, I think I'll slow things down for a little bit. Give the reader a breather and let the protagonist ruminate over his situation. I also have another set of important charactors to introduce. But first I have to finish this gunfight. It's probably going to take another thousand words or two. Making it the biggest scene in the first part of the book. I'll have to go over it later when I have more of the book written, to see if it needs to be reduced in size or not.
.
The kids are going to be home with me for Presidents Day today, so I doubt I'll get much writing done. That's one of the reasons I sat up so late writing tonight. Ah well, I need to turn in and get a few hours of shuteye before dawn.
Posted by D. Nathan Hilliard at 2:39 AM