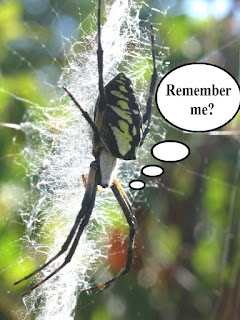 
So on the surface, Maggie normally comes across as forceful, stern, and sometimes harsh. But underneath there is confusion over her own identity, fear of losing loved ones, and an uneasy relationship with her own emotions.
Posted by D. Nathan Hilliard at 10:18 PM
Labels: argiope, Maggie, Spiderstalk