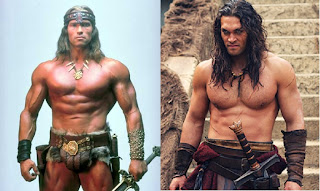 So, they are remaking Conan.

Above we see the old Conan of the 1980's and the 21st century Conan. To be honest, I'm starting to fear the worst.

I think the problem is that some remakes aren't approached in the right way. It seems to me there need to be a few questions honestly answered before the first frame of film of a remake is shot.

1. Is there a demand for a remake? Are people really feeling the need for more of the original product?
2. Can it be made better? Because if you are offering something that isn't as good as the original, or even just on a par, then the audience already has the original to enjoy and your effort is already doomed to scorn.

Now some people try to get around the above questions by claiming they are "re-envisioning" the product. That's okay to a point, as long as you are still staying true to the spirit of the original. You can change the style of Superman's suit, and raise or lower his power to a degree for different versions, but you still have to stay true to certain archetypes or it's no longer really Superman. And once you stray to far, you lose the audience of that character.

There also seems to be a temptation lately to use CGI as an excuse to think that certain films could be made "better" when the final product shows just the opposite to be true. A good example of this is the remake of John Carpenter's "The Fog." The original was a low budget horror film who's antagonists were dark, dripping figures lurking in the mists that were armed with hooks and other sharp instruments. CGI allowed filmmakers to make them ghostly figures with godlike powers something akin to telekinesis...and it sucked. It was awful. It should have never been made.

Truthfully, I view remakes with only slightly less reserve than I do sequels. Of course they are different beasts and should be considered in completely separate catagories...but all too often the motivation that drives both in the face of good common sense is the same. Money. And while there is nothing wrong with making money, I wish people would stick to attempting to make it on projects that are not bad ideas.
Posted by D. Nathan Hilliard at 10:26 AM